The Ruin of Kings by Jenn Lyons

on August 17, 2020
This is my second time reading this book. I did receive an ARC last year prior to its release, so check out my initial thoughts and rating from my first review here. 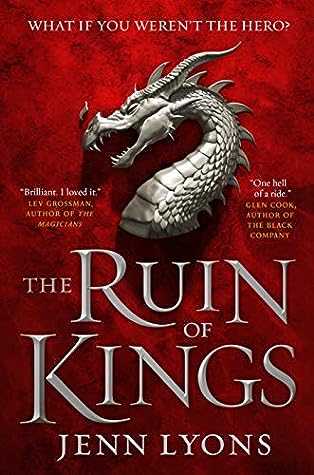 Title: The Ruin of Kings

Series: A Chorus of Dragons #1


When destiny calls, there's no fighting back.

Kihrin grew up in the slums of Quur, a thief and a minstrel's son raised on tales of long-lost princes and magnificent quests. When he is claimed against his will as the missing son of a treasonous prince, Kihrin finds himself at the mercy of his new family's ruthless power plays and political ambitions.

Practically a prisoner, Kihrin discovers that being a long-lost prince is nothing like what the storybooks promised. The storybooks have lied about a lot of other things, too: dragons, demons, gods, prophecies, and how the hero always wins.

Then again, maybe he isn't the hero after all. For Kihrin is not destined to save the world.

He's destined to destroy it.

Jenn Lyons begins the Chorus of Dragons series with The Ruin of Kings, an epic fantasy novel about a man who discovers his fate is tied to the future of an empire.

Quote(s) I Like:
"You can look at someone your whole life and never see them." - Ola

"I'm giving you a gift. You say it's a curse. I'll tell you something not one in a thousand would-be-heroes ever realize: it's both, and always will be. Good luck and bad luck. Joy and pain. They will always be there. It won't be better if you follow me. A hero who has never had a bad thing happen to him isn't a hero -- he's just spoiled." - Little Girl

"You have that choice. But choices are rarely clean creatures without entanglements and complications." - Little Girl

"Wanting something is not enough. Talent and desire is meaningless without skill and training." - Lady Miya

My Thoughts:
The world, the characters, the secrets, the twists and drama were just all epic! Jenn's writing is not for those who are knew to the fantasy genre as this world has it's own religion, rankings, races, magic system and so forth. It can be a bit much for a fantasy newbie, but it does all come together. For me, I keep a few index cards of notes to keep up with all the info, characters and gods mentioned.

The storytelling within this book is not your usual linear way. The story is told by three narrators: a 3rd party, Kihrin and Talon. Talon starts the story from the beginning and Kihrin tells the story from mid-point. Both however meet towards the end to a smooth story. The third person comes in the form of footnotes and two letters (the beginning and the end). It will take some time to get into the storytelling, but once you do it goes smoothly.

Kihrin is a poor musician's son or so he thought. He's really a long lost prince and so much more. I love his character from beginning to end. He cracks me up and he's very straight forward. Seeing his growth and the things he experiences throughout the story just makes you love him and invest your all into him.

There are a TON of characters to list and I just can't go name by name. Just know I still loved them all and their parts in the story. I enjoy the diversity in this book from people of color to LGBT representation by various characters. Though this is a meaty fantasy novel, it pulls you in from beginning to end.

I'm excited to continue to see what's in store for Kihrin in the sequels, The Name of All Things and The Memory of Souls.

Side Note: I do recommend the audiobook!


If you have not read this book, please do so!! It's epic!
4.5 Hearts Adult Book Review Epic Fantasy