Welcome to my tour stop for the Foresworn blog tour. I totally have to say this book is absolutely fabulous and I hope you find my review helpful! 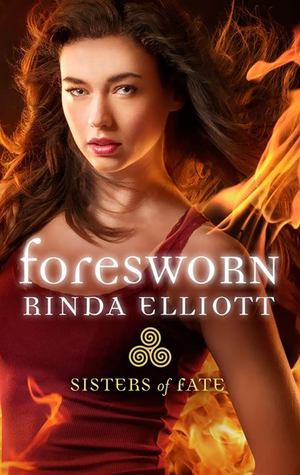 
It is written that three Sisters of Fate have the power to change the world’s destiny.

But only if they survive…

Kat Lockwood grew up listening to her unhinged mother’s stories about the Norse goddess souls she and her triplet sisters carry, about fiery deaths and a prophecy foretelling the world’s end. Now, to save that world, Kat must find a guy who hosts the soul of a Norse god–a warrior with the lightest blond hair and the darkest brown eyes.

But at a truck stop on her road trip, Kat freezes time while she writes out a cryptic message in runes. The only other person able to see this happen? A gorgeous guy with the lightest blond hair and the darkest brown eyes.

Kat’s not convinced peaceful Arun is the future warrior who will turn the tide in the final battle. Yet, Arun turns out to be a lot tougher than he seems. As soul-carrying teens and underworld creatures gather over the world’s deadliest volcano, Kat finds that no one, including her sisters and mother, is exactly who she thought they were….

The prophecy doesn’t lie: one is doomed to die.

“Call me later. At this number. Let me know you’re okay.”

“I will.” Other people in the parking lot were stopping, rubbing their ears. “Hey, Raven? Be safe, okay?”

The sadness in my sister’s voice cut into me.

Arun came around his truck. “It feels like the world is muffled.”

I nodded because that’s exactly how it felt. Like someone had plugged my ears so all the sound around me came at a different decibel. It was so strange. Like even my nose had been stuffed with cotton balls.

“Come on,” he said. “Maybe it’s better inside the store.”

But the closer we walked toward the store, the quieter it got. I walked around a set of shopping carts, noticed that even the sounds in the air—the cars, birds and snow—seemed to disappear. To test my theory, I went back and walked on the other side of the carts. Sound got louder.

I took Arun’s hand and pulled him back to walk him on either side of the carts to show him. He stared to our left. “Someone yelled over there earlier. Let’s head that way.” He pointed toward the fast-food restaurant at the front of the store’s parking lot. There was a lake beyond the restaurant, and I looked around and realized this was near the place I’d pulled over to talk to Raven yesterday morning. It was hard to believe everything that had happened since then.

We walked closer to the lake. Snow fell hard and fast, coating the trees, the ground. Some even floated on top of the water. A group of blackbirds gathered overhead and I heard the distant sound of their cries.

But they were right over our heads.

They should have been so loud.

After we stepped off the pavement and onto the grass, everything sort of just stopped. I stepped to the right and again heard the cries of the blackbirds above us. Barely. Arun touched my arm and I looked at him. He held up a finger in the universal “wait” signal. Frowning, he took another step to the right, stopped, then moved left. His dark eyes went wide and he gestured for me to follow.

I stepped to the left and even the sounds from the birds disappeared.

At this point, all I heard was the fast pound of my own heartbeat. And it raced, raced, raced because everything in me at this point was screaming for me to start walking backward. Back into the parking lot, back to the truck. As fast as humanly possible.

But another part of me wanted to keep going left so I could see why the noise seemed to be sucked out of the atmosphere with every step.

So I took another.

This time, even my heartbeat stopped sounding in my ears. There was complete and total silence and nothing in my entire weird, crazy life had ever sent this sort of terror singing through my veins. It moved so fast and hard, I half expected to hear it swimming through my body.

I closed my eyes, tried to wrestle back the fear and felt Arun take my hand.

I stared at his hand, then looked up at him, expecting to find one of his kind smiles as he offered me comfort. But he wasn’t looking at me. His eyes were narrow and directed to a group of drooping snow-covered trees right next to the water.

In that moment, something in my chest—this knot that had made everything feel tight and full—sort of loosened up. Warmth flowed through me, and I tightened my fingers around his. His expression, when he looked down at me, turned that warmth into something I hadn’t felt since that night I’d taken another boy’s hand and followed him into the woods.

Arun tilted his head left, wanting me to go with him.

I nodded but tugged on his hand first.

He bent close but shook his head. I knew he was telling me he wouldn’t be able to hear me, but I hadn’t planned to say anything. Instead, I stretched up and pressed my lips to his. He smiled against my mouth, then kissed me back. When I pulled away, there was something new in his gaze as he stared at me, something thoughtful. And something kind of hot.

Answering heat crept up my neck, and I guess he could see it because he grinned and touched my cheek.

Brigg’s face appeared right next to ours and he rolled his eyes.

I rolled my eyes back, then glared at him.

He laughed silently, his smile fading fast as he pointed.

The third and final book in the Sisters of Fate trilogy. This trilogy follows the Lockwood triplets, Raven, Coral and Kat during Ragnarok and them coming to terms with being Norse goddesses reincarnated aka Norns. This follows the youngest sister, Kat.

Possibly the best ending ever to a trilogy! I absolutely favor this one more than the other two books which means this trilogy just gets better and better each book. It's fast paced, action packed and full of unexpected twists and turns.

Kat is the youngest of her sisters yet the most fierce of them all. She was determined and the link between her sisters in my opinion. Arun, a reincarnated Norse god, was just as sweet as Vanir was. He was strong, handsome and powerful. I loved him in all aspects. The romance between Kat and Arun was just freaking adorable times ten! They are the definition of opposites attract. Where Kat was fierce, Arun was calm.

I loved that they sisters and their significant others are reunited in this book. The showdown was simply outstanding! That ending was a bit shocking for me and did leave me hanging but in a good way.

As for their mother, Ms. Lockwood -- I've come to find that I don't like her, but I did enjoy her involvement in their lives and with Ragnarok.

Overall, this trilogy was freaking fabulous and I definitely have it on my reread list for 2015! Awesome YA Paranormal about Norse mythology.

I love unusual stories and credit growing up in a family of curious life-lovers who moved all over the country. Books and movies full of fantasy, science fiction and romance kept us amused, especially in some of the stranger places. For years, I tried to separate my darker side with my humorous and romantic one. I published short fiction, but things really started happening when I gave in and mixed it up. When not lost in fiction, I love making wine, collecting music, gaming and spending time with my husband and two children.

I’m represented by Miriam Kriss of the Irene Goodman Agency.

This event is hosted by