The Name of All Things by Jenn Lyons

on August 26, 2020
If you have not seen my review of book one, The Ruin of Kings, I highly suggest you read that book review first! 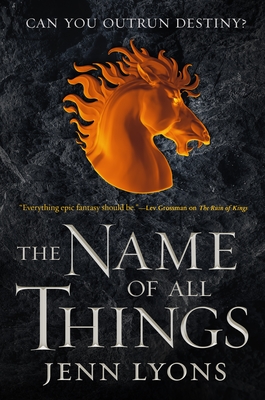 Title: The Name of All Things

Series: A Chorus of Dragons #2

Kihrin D'Mon is a wanted man.

Since he destroyed the Stone of Shackles and set demons free across Quur, he has been on the run from the wrath of an entire empire. His attempt to escape brings him into the path of Janel Theranon, a mysterious Joratese woman who claims to know Kihrin.

Janel's plea for help pits Kihrin against all manner of dangers: a secret rebellion, a dragon capable of destroying an entire city, and Kihrin's old enemy, the wizard Relos Var.

Janel believes that Relos Var possesses one of the most powerful artifacts in the world--the Cornerstone called the Name of All Things. And if Janel is right, then there may be nothing in the world that can stop Relos Var from getting what he wants.

And what he wants is Kihrin D'Mon.

Jenn Lyons continues the Chorus of Dragons series with The Name of All Things, the epic sequel to The Ruin of Kings.

Quote(s) I Like:
"An obsession with owning something isn't the same as loving it." - Kihrin

"What you can't protect, you forfeit the right to rule." - Senera

"Nobody values the prize they win without an effort." - Janel

"No. Monster is such an easily digestible idea. Horrible, evil to its core, irredeemable. If I'm a monster, then anyone who opposes me is by logical deduction a hero, yes? It's not, that simple. Sometimes everyone is wrong and you must decide whose wrongness is more acceptable." - Relos Var

"How easy is it to convince ourselves we're infallible, that our way and point of view are the only ones that matter. Oh, it is the easiest trap, and it always comes loaded with the most effective bait, our own desperate need for self-worth." - Janel

"Sometimes you watch your friends make mistakes and there's nothing you can do but let them." - Relos Var

My Thoughts:
Once again Jenn has crafted a beautiful fantasy! This was just as good as book one. I loved the reveals and how the "missing" info from The Ruin of Kings was revealed in this book. Also seeing the other side of the story from the characters. The world-building was good, still so much to be desired about the world. I enjoyed learning more about the history of Quur and seeing other places. The writing is still not a linear story. The flashbacks are much different from how the first book wrote them, but it's still told in two distinct POVs. This book really explorers the grey area of ones morals which I enjoyed immensely.

I wasn't completely sold on the new characters but still loved Kihrin and Janel the most. They are two peas in a pod. I hope they stay together, even thought that reveal with Teraeth threw me for a loop! I'm ready for them to kick butt together against Relos Var.

The dragons are my second favorite thing in the story. So far we've meet about five dragons, so there are four more to meet. I love their personalities and how they interact with the characters. They are all funny!

Relos Var with his "arc" is still annoying as heck to me! I didn't know whether he was good or bad because he kept playing the bad guy who does good things. However, I officially dislike his character! Brother Qown broke my heart! I was so rooting for him, but he had to go and mess things up.

The cast of characters was just as insane as book one, but I just wasn't sold on them all. I did enjoy Senera, Arasgon, Dorna, Nina, Xivan and Wryga though. I love that this book has so much LGBTQ+rep in it!!! I was here for all the different conversations about Jorat and sexuality. Stallion vs Mare LOL -- I couldn't help but giggle at how amazing it was.

That ending was pretty good and has me excited to book three, The Memory of Souls. My only question is are the gods good or evil LOL. One minute they are good and the next thing they are not.

Side Note: This is not a fantasy for everyone. If you did not enjoy book one, you might not like book two.


Have you read this book?
Not yet, then go and buy a copy!
4 Hearts Adult Book Review Epic Fantasy