Looking for a comedic urban fantasy that will put you in the atmosphere of New Orleans? Do you like sassy female characters? If so, check out the sequel to The City of Lost Fortunes. 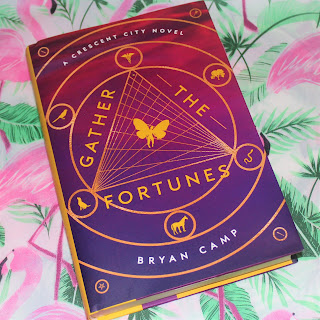 
Fate decides where you go when you die. She makes damn sure you get there.

Renaissance Raines has found her place among the psychopomps—the guides who lead the souls of the recently departed through the Seven Gates of the Underworld—and done her best to avoid the notice of gods and mortals alike. But when a young boy named Ramses St. Cyr manages to escape his foretold death, Renai finds herself at the center of a deity-thick plot unfolding in New Orleans. Someone helped Ramses slip free of his destined end -- someone willing to risk everything to steal a little slice of power for themselves.

Is it one of the storm gods that’s descended on the city? The death god who’s locked the Gates of the Underworld? Or the manipulative sorcerer who also cheated Death?  When she finds the schemer, there’s gonna be all kinds of hell to pay, because there are scarier things than death in the Crescent City. Renaissance Raines is one of them.

Quote(s) I Like:
"Death is all at once without conflict or contradiction -- because death is the end of all conflicts, is beyond contradictions. Both nothing and everything." - Unknown

"I just mean, like, shouldn't we be happy for him? 'Innocent bystander in a drive-by' is such a bullshit cliche way for a young black kid to die. Shouldn't we be glad he gets a chance at something more?" - Renai

"Our lives are both predestined and uncertain. Fate and Fortune: two sides of the same coin." - Unknown

"The best place to hide is where the person chasing you would never expect." - Renai

Renai is half dead and half alive. After her encounter with Jude in The City of Lost Fortune she works as a psychopomp which is a guide that escorts the dead through the seven gates of the Underworld. Renai is a spitfire! I loved her from the first book because she was sarcastic, charming and funny. In this book she is the same, but she's also a bit more "hard" when dealing with people. Renai faces everything head on and tries hard to get her job done and on point.

Sal is still an awesome character. Whether he is in human, bird or dog form he was still awesome to me. Comical with his retorts and helpful when need be. Cordelia, Seth and Mason played their roles well and added to the suspense of the story. The whole thing with Ramses still confuses, but it played its purpose.

Jude, Regal and Leon make an appearance and I loved it! They were still the same as I remembered in the first book. Jude is more of an ass with his new position as the Fortune God. Leon is a bit more sensible as the Voice. Regal is more badass as the Magician. I love this little trio!!!

That ending killed me. I loved it, but also disliked it. Overall, this is a phenomenal urban fantasy. I can't wait for the next book to come out.

Bryan Camp is a graduate of the Clarion West Writer’s Workshop and the University of New Orleans’ Low-Residency MFA program. He started his first novel, The City of Lost Fortunes, in the backseat of his parents’ car as they evacuated for Hurricane Katrina. He has been, at various points in his life: a security guard at a stockcar race track, a printer in a flag factory, an office worker in an oil refinery, and a high school English teacher. He can be found on twitter @bryancamp and at bryancamp.com. He lives in New Orleans with his wife and their three cats, one of whom is named after a superhero.

Giveaway
-Giveaway is open to International
- Must be 13+ to Enter
- 10 Winners will receive a Copy of GATHER THE FORTUNES by Bryan Camp.
- Ends June 15

Does this book sound like a read for you?
Check it out!!
3.5 Hearts Adult Blog Tour Book Review Urban Fantasy