A History of What Comes Next by Sylvain Neuvel

A huge shout out to both JeanBookNerd and Tor for having me on this tour and sending me a copy for review. This was my first read o Sylvian's so keep reading to see my thoughts.
Don't forget to check out the other awesome bloggers on the tour! 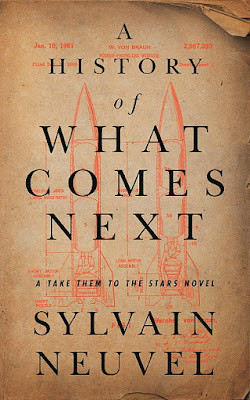 Title: A History of What Comes Next

Series: Take Them to the Stars #1


Showing that truth is stranger than fiction, Sylvain Neuvel weaves a scfi thriller reminiscent of Blake Crouch and Andy Weir, blending a fast moving, darkly satirical look at 1940s rocketry with an exploration of the amorality of progress and the nature of violence in A History of What Comes Next.

Always run, never fight.
Preserve the knowledge.
Survive at all costs.
Take them to the stars.

Over 99 identical generations, Mia’s family has shaped human history to push them to the stars, making brutal, wrenching choices and sacrificing countless lives. Her turn comes at the dawn of the age of rocketry. Her mission: to lure Wernher Von Braun away from the Nazi party and into the American rocket program, and secure the future of the space race.

But Mia’s family is not the only group pushing the levers of history: an even more ruthless enemy lurks behind the scenes.

A darkly satirical first contact thriller, as seen through the eyes of the women who make progress possible and the men who are determined to stop them.

My Thoughts:
This was a really good read. The story was intriguing. The timelines were gripping. However, I wasn't really sold on it. I am intrigued enough to finish on the with the series. The writing was well done, but the execution was a bit confusing for me. The action and worldbuilding were both great. The sci-fi is where I got lost as well. I am not a huge sci-fi reader so I don't hold it against the book at all. I do see me re-reading it before the sequel comes out for sure.
If you are a fan of sci-fi novels and alternate history stories, then this would be a great book for you to check out.

Sylvain Neuvel dropped out of high school at age 15. Along the way, he has been a journalist, worked in soil decontamination, sold ice cream in California, and furniture across Canada. He received a Ph.D. in linguistics from the University of Chicago. He taught linguistics in India, and worked as a software engineer in Montreal. He is also a certified translator, though he wishes he were an astronaut. He absolutely loves toys; his girlfriend would have him believe that he has too many, so he writes about aliens and giant robots as a blatant excuse to build action figures (for his son, of course). His debut, Sleeping Giants, was described by NPR as “one of the most promising series kickoffs in recent memory.”
Website | Goodreads | Instagram | Facebook | Twitter
Giveaway
- Giveaway is open to International
- Must be 13+ to Enter
- 3 Winners will receive a Copy A HISTORY OF WHAT COMES NEXT by Sylvain Neuvel.
- Ends March 8, 2021
a Rafflecopter giveaway
Do you plan to read the latest release from Sylvain?!
3 Hearts Adult Blog Tour Giveaway Historical Fiction Sci-Fi