A broken mortal looking to become immortal. A broken woman whose only friend is the darkness that surrounds her. A world steeped in confusion. Check out my review of Forgotten. 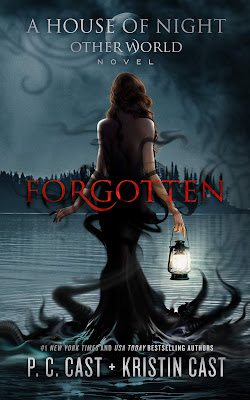 Series: A House of Night Otherworld #3


Before he was freed by Neferet, Kalona was imprisoned within the earth for centuries because of the Darkness in his heart. But what happened to the Other World’s Kalona? It’s as though he’s been forgotten, or maybe he never existed at all …

In the present, Other Neferet may have left her House of Night, but she has far from given up her goal of immortality and world domination. As she operates in secret to gain access to Old Magick, the new High Priestess, Anastasia Langford, works toward peace and acceptance for the vampyres of the Other World. But just as Other Kevin’s broken heart will take time to heal, peace in that world will also take time and work—and not all of the Other World vampyres want peace. After all, why should they return to being shunned by humans, especially when they’ve had a taste of how it feels to be in power?

Meanwhile, Zoey is desperate to help rid the Other World of Neferet once and for all, and not knowing what’s going on over there is eating away at her. But, as the Nerd Herd warns, it’s far too dangerous to call on Old Magick time and again. As a distraction, she throws herself into her work and attempts to bring the humans and vampyres of Tulsa closer together with the first human-vampyre swim meet in history! It’s too bad that something always seems to go wrong whenever the stakes are high.

What happens when worlds clash and powers that should be left alone are awakened? Can Other Kevin and his world heal from the wounds Neferet continues to inflict? Can Old Magick ever truly be harnessed and used for good? Or will Darkness extinguish Light and leave our heroes broken, hopeless, and as forgotten as Kalona of the Silver Wings? Don’t miss this second to last volume in the House of Night Other World saga!

Quote(s) I Like:
"Joy isn't easy or inherent. It is a choice, and not always an easy one -- not at first. I've wanted to retaliate against Kalona's sarcasm and anger and just general grumpy meanness, but I choose not to. Though I do understand your meaning. We were created to fulfill different purposes, and though we are brothers we are definitely not similar." - Other Erebus

"Despair...anger...both emotions are allies of Darkness. Both will eventually destroy Light if left unchecked." - Mother Earth

My Thoughts:
Okay, so as much as I wanted to give this a full on 5 star rating, I just could not deal with Other Neferet this entire book. It focused more so on her after the events of Lost. The writing was great, the character interactions were good, but I just found this book to highly more annoying then the others.

Other Neferet is an evil, twisted and sad woman that hates all men and seeks loyalty from people she treats like dogs. I didn't care for her. Though I feel bad for her past as Emily, she's just too evil and mean. She does things to only further her own goal of becoming a queen b*tch. I can't stand her, but she plays the villain role well.

I loved the story of Other Erebus and Other Kalona at the beginning. Probably my favorite part of the entire book honestly. I am excited to continue on with the series to see what happens next, but I'm just over Neferet and the White Bull. They both need to go.

Definitely recommend the House of Night Other World series.

Sidenote: let's talk about how GORGEOUS the cover is though. Stunning in every way. As much as I can't stand Neferet, I think she looks B O M B on this cover. 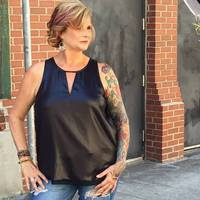 PC was born in the Midwest, and grew up being shuttled back-and-forth between Illinois and Oklahoma, which is where she fell in love with Quarter Horses and mythology (at about the same time). After high school, she joined the United States Air Force and began public speaking and writing. After her tour in the USAF, she taught high school for 15 years before retiring to write full time. PC is a #1 New York Times and #1 USA Today Best-Selling author and a member of the Oklahoma Writers Hall of Fame. Her novels have been awarded the prestigious: Oklahoma Book Award, YALSA Quick Pick for Reluctant Readers, Romantic Times Reviewers’ Choice Award, the Prism, Holt Medallion, Daphne du Maurier, Booksellers’ Best, and the Laurel Wreath. PC is an experienced teacher and talented speaker. Ms. Cast lives in Oregon near her fabulous daughter, her adorable pack of dogs, her crazy Maine Coon, and a bunch of horses. House of Night Other World, book 1, LOVED, releases July 11th. SUN WARRIOR, book 2 in the Tales of a New World series releases October 17th. 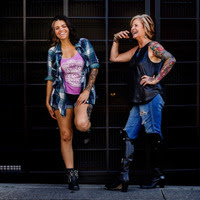 Kristin Cast is a #1 NY Times and #1 USA Today bestselling author who teamed with her mother to write the wildly successful HOUSE OF NIGHT series. She has editorial credits, a thriving t-shirt line, and a passion for all things paranormal.

When away from her writing desk, Kristin loves going on adventures with her friends, family, and significant other, playing with her French Bulldogs (Grace Kelly and Sir Laurence Olivier), and discovering new hobbies. This year she'll work on handstands, gardening, and taking her new puppy (Baloo) to puppy classes.