Looking for a great fae story with action, romance and family drama? Check out Silver Hollow! 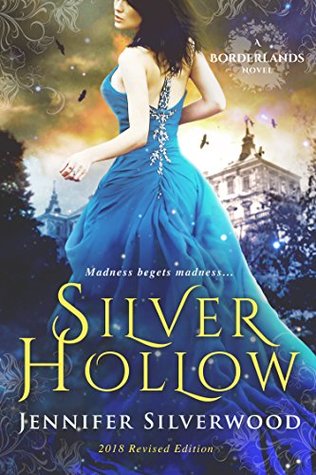 After her parents' car crash ten years before, Amie Wentworth trusts books more than people. She may be a writer, but she believes in reality over fiction. She ignores the unexplained mysteries surrounding her, never mind the dreams of a past life, or the fact she can fry technology with a touch. Not even a timely invitation from her long-lost uncle in England gives Amie incentive for anything other than ire.

Until she is stabbed in an alley and brought back to life by a handsome stranger. Soon Amie is dragged into the very sort of tale she is used to selling. To make matters worse, the man who saved her life keeps turning up and her would-be-murderer is still at large.

After crossing the Atlantic to her father’s homeland, she discovers a world beyond imagining. Silver Hollow is a place of ancient traditions and supernatural dangers, where everything is the opposite of what it seems and few escape sane. Faced with an impossible choice, Amie is forced to confront a deadly family legacy while remembering a life she soon wishes to forget.

**Previously published in 2012. This NEW EDITION has been FULLY REVISED AND EXPANDED. The original novel is now no longer available.**

My Thoughts:
This was an absolute amazing read! Full of magic, family drama and secrets. I enjoyed the fast pace of this story and the characters. The writing was phenomenal.

Jessamiene aka Amie was such a strong, determined and powerful woman. I love how her hardships made her stronger and not weaker. Her world and life was completely turned upside down and she still managed to come out on top. Finding out who she really was made me excited.

Emrys was amazing. Though he did a lot of bad I still loved him. He was cautious and loving. He was funny and witty. I loved his sarcasm as well. Many of the characters seemed to dislike him and I definitely understood why. However, Emrys was dealt a crap hand and did the best he thought he could. Emrys was my favorite male character by far and despite how he ended I hope to see more of him.

The romance between Amie and Emrys was EVERYTHING. Funny banter, sexy evenings, long lost love...what more could you ask for. Their love was a strong one that didn't fail. I loved the way they interacted with one another and how they also kept one another in the forefront of their mind. Perfect romance.

Nimue was an intriguing character. I don't fully understand much about her, but I do know that she was kickbutt and sassy. She had a terrible past, but managed to live on. I hope to find out more about her.

Arthur was such an AWESOME grandfather hands down. I totally loved how he treated Amie and how bold he was for his age. Totally cool and down to earth. He could definitely be my grandpa.

The Seelie King Henry was an annoying and despicable man. I can't believe all that he did to Amie, especially considering that she was family.

Morcant was an evil witch. I totally dislike her. Grimwich is just as terrible as his sister was, but he was much more devious. He definitely made me laugh, but as the story ended I began to dislike him. I know there is much more to him being The Storyteller so I'm interested in seeing what happens in the sequel.

That ending has left me speechless! I cannot explain the mixed emotions I have about that cliffhanger. I need the sequel ASAP.

Jennifer Silverwood was raised deep in the heart of Texas and has been spinning yarns a mile high since childhood. In her spare time, she reads and writes and tries to sustain her wanderlust, whether it's the Carpathian Mountains in Transylvania, the highlands of Ecuador, or a road trip to the next town. Always on the lookout for her next adventure, in print or reality, she dreams of one day proving to the masses that everything really is better in Texas. She is the author of three series--Heaven's Edge, Wylder Tales and the Borderlands Saga--and the stand-alone titles Stay and She Walks in Moonlight. She released her first serialized Urban Fantasy, Angel Blue in August 2018.