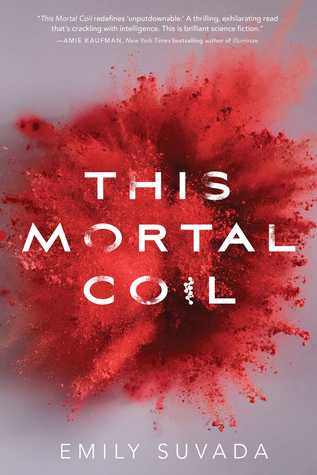 
In this gripping debut novel, seventeen-year-old Cat must use her gene-hacking skills to decode her late father’s message concealing a vaccine to a horrifying plague.Catarina Agatta is a hacker. She can cripple mainframes and crash through firewalls, but that’s not what makes her special. In Cat’s world, people are implanted with technology to recode their DNA, allowing them to change their bodies in any way they want. And Cat happens to be a gene-hacking genius.That’s no surprise, since Cat’s father is Dr. Lachlan Agatta, a legendary geneticist who may be the last hope for defeating a plague that has brought humanity to the brink of extinction. But during the outbreak, Lachlan was kidnapped by a shadowy organization called Cartaxus, leaving Cat to survive the last two years on her own.When a Cartaxus soldier, Cole, arrives with news that her father has been killed, Cat’s instincts tell her it’s just another Cartaxus lie. But Cole also brings a message: before Lachlan died, he managed to create a vaccine, and Cole needs Cat’s help to release it and save the human race.Now Cat must decide who she can trust: The soldier with secrets of his own? The father who made her promise to hide from Cartaxus at all costs? In a world where nature itself can be rewritten, how much can she even trust herself?

Quote(s) I Like:
"Nature designed this plague as a double-edged sword: It either takes your life, or it takes your humanity." - Catarina

"It matters because your father is the reason we're doing this. We're following a couple of his notes to do something we don't understand, and it might put us all in danger. If you don't have faith in the man he was, there's no reason we should keep going." - Cole

"Sometimes we need to do awful things to stop worse things from happening. You're still thinking in terms of right and wrong, but this is war, and the rules have changed." - Cole

"There's nothing so dangerous as an Agatta's best intentions." - Leoben

My Thoughts:
Well, I settled on giving this a rating of 3.5 stars. I am not a huge fan of sci-fi or dystopian novels, but this one definitely was good in my opinion. I couldn't give it a full 4 stars because I needed more from the story, but for a first book it was seriously awesome.

This book is full of surprising twists and turns. I read this in conjunction with listening to the audiobook, which was phenomenal. This was a bit slow paced for me, but when the action happened it definitely picked up. There is bloodshed, secrets, betrayals and so much drama. This was truly engaging though it was slow.

Catarina was a kickass protagonist! Everything about her kept me wanting to know more. She was brilliant, sweet, loving, loyal -- I mean she was everything. Cat was a force to be reckoned with. Having lived on her own for almost 2 years and surviving in a world where a virus is detonating people or forcing them to be cannibals, she did well. She survived, but at such a major cost. Despite everything she was put through, she managed to keep pushing forward in her life. I loved her positivity, even when things looked terrible.

Cole seemed like a stuffy solider, but I fell in love with him from the first page. He was straight-forward and to the point, but there was something about him that clicked with me. Finding out about his upbringing and what he was in Cataxus made me love him even more. Despite his shitty upbringing he made the best out of his life. Cole was bae for me!

The romance was to die for! I loved Cole and Cat from their first interaction, but as the story progressed on and secrets were revealed I loved them even more. They were soulmates in my eyes. They completed one another in ways that seemed hard to believe, but when truths are revealed it all made perfect sense. I totally shipped them.

Dax was Cat's ex and also worked for her father. I liked him at first, but after he left and then when he came back after Cole I just didn't care for his character. He was a grade-a douche to me. He seemed to be a nice guy in those first few chapters, but compared to Cole he's a flop.

Leoben was a beautiful, humorous addition to this story. He was a funny character, the total opposite of Cole. He kept the comedy alive in this story for me. I'm interested in seeing more and learning more about him in the sequel.

Cartaxus and Skies both seemed fishy to me from the start, but as the story progresses their secrets are revealed and I didn't know whether I liked them or not. Things were just too crazy for the ties they had.

Jun Bei -- oh my...there are just no words for the revelation of who she is and how bad ass she was. Everything about her seemed crazy. She was one tough cookie, but I loved finding out who she truly was as the story progressed -- probably the best turn of events ever,

Overall, I am excited to get into This Cruel Design and reading what happens next for Catarina and Cole. If you're a lover of sci-fi or dystopian, this may just be the read for you!