Blog Tour | Into the Fire

Welcome to my tour stop for the Into the Fire Blog Tour hosted by Chapter by Chapter. I am so excited to be apart of this tour and share my review with you all today! 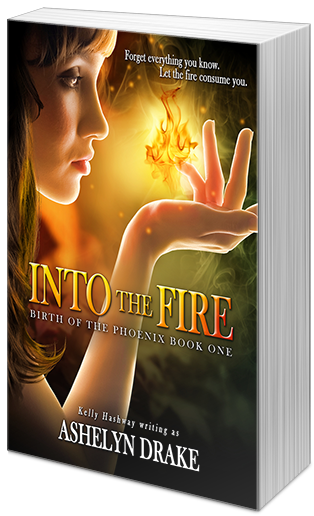 Title: Into the Fire

Series: Birth of the Phoenix #1

Source: Courtesy of the author

Seventeen-year-old Cara Tillman’s life is a perfectly normal one until Logan Schmidt moves to Ashlan Falls. Cara is inexplicably drawn to him, but she’s not exactly complaining. Logan’s like no boy she’s ever met, and he brings out a side of Cara that she isn’t used to. As the two get closer, everything is nearly perfect, and Cara looks forward to the future.

But Cara isn’t a normal girl. She’s a member of a small group of people descended from the mythical phoenix bird, and her time is running out. Rebirth is nearing, which means she’ll forget her life up to this point—she’ll forget Logan and everything they mean to one another.. But that may be the least of Cara’s problems.

A phoenix hunter is on the loose, and he’s determined to put an end to the lives of people like Cara and her family, once and for all.

Kelly Hashway aka Ashelyn Drake has created an impeccable story surrounded around mythology, romance, family and deceit. I was blown away by how this kept my hooked from the very first paragraph all the way until the end. The love story between Cara and Logan is perfect and balances out the mythology behind Cara being a Phoenix.Cara is a very shy country-side girl with a huge secret, but so do a few of the people in Ashlan Falls. They are Phoenixes. Cara is a month away from her rebirth when she meets an attractive young man that happens to pull her in the most unexpected way. Logan is a bold city guy with a simple infatuation for Cara that is unexpected. He can't keep away from her and falls instantly in love with her. He is dragged into the word of Phoenixes and must figure out how things work.The relationship between Cara and Logan is increasingly seamless. Granted it was instalove for them both, but I love how they tried to keep cool and get to know one another.The fact that Cara was close to her rebirth was one struggle, but she had her brother Jeremy who just went through his rebirth, an overprotective mother, a strong love for Logan which makes her powers unstable and a Phoenix hunter on the loose.Finding out who the Phoenix hunter was didn't really surprise me at all, but then again it did as well. I was shocked by how well the hunter was able to infiltrate the lives of Cara and Jeremy and pretend to be normal. The way in which he used his trust to lore Cara with him to the school and kill her was insane. I like how smart Cara was to dial Logan's number and leave a message with the hunter talking.I still think Logan's dad is a hunter simply because he is always working late and barely pops up in the story and since there are murders in the next town over I just assume his dad is a Phoenix hunter and that there are multiple hunters in the area out to kill.This was a perfect story and my first book introduction to the life and world of Phoenixes…PERFECTION! I read the sneak peak of Out of the Ashes, which I assume is book #2, and all I can say is -- I need it NOW!

Ashelyn Drake is a New Adult and Young Adult romance author. While it’s rare for her not to have either a book in hand or her fingers flying across a laptop, she also enjoys spending time with her family. She believes you are never too old to enjoy a good swing set and there’s never a bad time for some dark chocolate. She is represented by Sarah Negovetich of Corvisiero Literary Agency.