Looking for a YA that's packed with humor, a but of romance, spies and major drama?! Checkout The Deceivers. A school full of con artist! 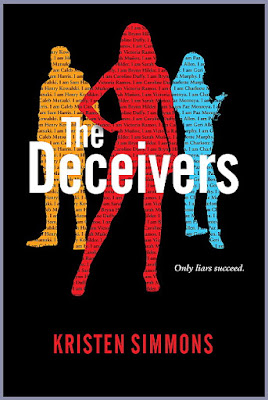 Welcome to Vale Hall, the school for aspiring con artists.

When Brynn Hilder is recruited to Vale, it seems like the elite academy is her chance to start over, away from her mom's loser boyfriend and her rundown neighborhood. But she soon learns that Vale chooses students not so much for their scholastic talent as for their extracurricular activities, such as her time spent conning rich North Shore kids out of their extravagant allowances.

At first, Brynn jumps at the chance to help the school in its mission to rid the city of corrupt officials--because what could be better than giving entitled jerks what they deserve? But that's before she meets her mark--a senator's son--and before she discovers the school's headmaster has secrets he'll stop at nothing to protect. As the lines between right and wrong blur, Brynn begins to realize she's in way over head.

My Thoughts:
I wasn't 100% sure how I would like this book, but the plot really intrigued me. I got the idea of an assassination/spy school, but without the murder aspect. This was a very good mystery novel with lots of drama!

Brynn is from the rough side of town. Loved by her mother, but stuck in a world that shows no love. She's living at home with an abusive, drug-dealer man; she's treated as an outcast as school and has to run con's to save up for college. I truly loved Brynn and her determination to make it out of her harsh reality. She works hard, she see's beyond the BS and she doesn't give up. I loved her spitfire attitude as well. She knew how to con a person well enough to walk away unharmed. Enjoyed seeing her grow.

Caleb seemed to be a major creep to me at first. I even saw him as Dr. Odin's "in man" but in actuality he was just a guy in love trying to protect his family and the one he liked. Caleb is a very caring guy. He had moments when he seemed like a creep and was very much rude, but as the story progresses and much is revealed about his "job" things begin to make sense. I doubted him at first, but I truly enjoyed him.

Grayson is the son of a highly connected senator with a dark past. He's also Brynn's mark. He is a rich, spoiled brat, but he's also a scared little kid. He has a dark past of his own and his father has made him terrified for his own life. I enjoyed Grayson because he sought a thrill consistently to escape his suffocating world. As the story progressed I definitely saw him as a guy with serious mental issues. Still not sure how I truly feel about him because that ending confused me a bit.

The romance was actually really good. I was expecting more between Grayson and Brynn, but I'm glad it went another direction for her and Caleb. The romance isn't super heavy, but it still plays a crucial role. Especially when you add in an ex-boyfriend to the mix. The love interests in this story all played a crucial role to the story line and to Brynn's life.

Dr. Odin seems like a well rounded man, but he's truly a crazy man. He runs Vale Hall -- a school of con artist with 20 students at a time. He's in the business of secrets and blackmail. I liked him in his role, but once things were shared toward the end, he creeped me out. I'm afraid of him and how far he goes to get what he wants. I'm interested in seeing if he's truly a good guy or just downright corrupted himself. He walks a very thin line between both.

Mr. Moore was awesome! I loved him, especially when he had that conversation with Brynn about taking the job at Vale Hall. Pete is a scum-bug of the worse kind. Marcus is a truly amazing guy. I would have liked more of a background story on him and his relationship with Brynn. Henry is the best "brother" ever! Charlotte is a doll! Geri was a conniving witch to me at first, but that ending SHOCKED me. She's good at what she does.

Overall, this was a really great YA mystery and drama filled story. Definitely fast paced and filled with humor.

KRISTEN SIMMONS is the author of the ARTICLE 5 series, THE GLASS ARROW, and METALTOWN. She has worked with survivors of abuse and trauma as a mental health therapist, taught Jazzercise in five states, and is forever in search of the next best cupcake. Currently she lives in Cincinnati, Ohio with her husband, where she spends her days supporting the caffeine industry and chasing her delightfully rambunctious son.

Giveaway
- Giveaway is open to International
- Must be 13+ to Enter
- 10 Winners will receive a Copy of THE DECEIVERS by Kristen Simmons.