Welcome to my tour stop for Shadow Fire by Kimber Leigh Wheaton! You are in for a treat. Today I have a review and excerpt. I absolutely love this book and if you're interested in knowing why read more..

I do want to thank Kimber Leigh Wheaton and Xpresso Book Tours for allowing me to be apart of this tour! 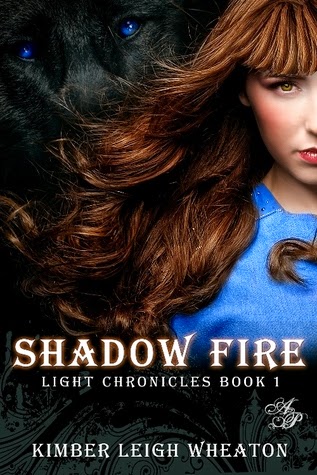 Source: Courtesy of the author


Ashlyn – a free-spirited teenager whose peaceful life is shattered when the village elders honor her with a perilous quest to recover a stolen relic.

Zane – a jaded mercenary, torn by his undeniable desire for Ashlyn and the dark secret that could make her hate him forever.

Delistaire – a malevolent sorcerer driven by an insatiable lust for power.

All three are bound together by an ancient relic supposedly infused with the power of a Goddess.

As Ashlyn and Zane race to stay one step ahead of the evil lurking in the shadows, their passions are ignited and their bond strengthens. But will they find the relic before Delistaire? Or has their entire quest been orchestrated from the very beginning by a madman in pursuit of ultimate power?

Looking for a ya novel with a bit of magic and romance? Well this is it! Kimber Leigh Wheaton did an amazing job writing this book. From the characters to the world building, I was totally pleased with this novel. The beginning did drag for me a bit, but once the action started I was sucked in until the end.A world ruled by a goddess, who has left her magical powers in a lost statue. A white wolf who is in fact a demigod, the son of the goddess. An evil sorceress looking to obtain absolute power. A hunk of a mercenary that has the hots for Ashlyn and a wolf who is the last of his kind. That all added up to drama, massive kissing sessions and the truth about the lies told for years.Ashlyn is the Chosen One of Verdane. Her goal as a pure girl is to go on the Quest, a dangerous journey, to retrieve the Goddess Reiki statue and return it back to Verdane. She is supposed to travel alone but a mercenary named Zane tags along to ensure her safety. During the quest they encounter monsters, mercenaries, a demigod, pirates and Delistaire, an evil sorcerer after the statue to obtain more power. During the journey truths are revealed and lies are demolished.I totally loved Ashlyn as a female protagonist. Despite being afraid she still stayed strong and fought her way through. She was clever at learning and fighting. She wasn't so emotional and she did not always need to have Zane save her.Zane was a hot character. I was totally smitten with his strong, content personality. He cared for Ashlyn deeply and was loyal to her at all points even down to the romantic side.The romance was a bit instalove, but it brewed slowly. Zane knew how he felt the moment he saw Ashlyn, but respected her quest which was sweet. The kissing between them was intense and the way he held her when they laid down, priceless.The secrets about who his father was, his mother, Ashlyn being a mage and the Goddess statue was unbelievable. The true history that was shared about the statue and both Zane and Ashlyn was truly incredible.The ending made me extremely happy. Glad everything worked out for Ashlyn despite finding the truth about the statue.As for Delistaire, he was not only a douchebag and power obsessed idiot but a horrible husband and demeaning father. What he has done throughout his time was just unspeakable. I seriously need him to get therapy, lol.The other characters I enjoyed in this book where Shadow, Ashlyn's wolf (the last of his kind). Loki, the demigod and son of the Goddess Reiki, the griffin and the ever so funny and friendly pirate Taranis. Taranis kept me laughing the whole time once he entered the story, but he was a brave and loyal young man.Characters I totally wanted to rip apart besides Delistaire were Cory because of what he did to Ashlyn at the very beginning and how he ruined her party and Mayor Franklin.Shadow Fire was an outstanding YA fantasy novel. I highly recommend for anyone to check it out. You won't be disappointed.


For my favorite quotes from this book go here.

There's no way this bandit is taking me without a fight!

My fingers creep toward the dagger on my right thigh, inching the fabric of my skirt up over the sheath. If I can just manage to reach the dagger, I'll have a fighting chance. No sudden moves, just slow and easy. When my fingers reach the hilt and I grab it only to have it torn away from my grasp.

Caught up in panic, I almost forget about the stiletto hidden in my boot. He starts dragging me backward again. I thrash in his grip, wincing in pain from the multiple cuts left by his dagger. Blocking out the pain, I continue to fight, kicking my legs in the air in an attempt to topple him. He leans forward trying to subdue me and I smash my head into his face. The bandit lurches away, his disorientation giving me the opening I need. Grabbing the stiletto from my boot, I stab it backward into his stomach

He staggers in  pain, loosening his grip and I'm able to squirm free. Zane has just finished disposing of the bandits he was fighting. I throw myself into his outstretched arms. Before anyone can advance on the fallen man to finish him, Shadow appears in a piece, ferocious growls piercing the night air. Turning away from the carnage, I bury my face in Zane's neck and inhale his comforting scent.

"I'm so sorry, baby," Zane coos while stroking my hair. 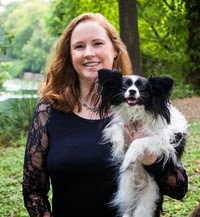 Kimber Leigh Wheaton is a YA/NA author with a soft spot for sweet romance and is a member of Romance Writers of America.She is married to her soul mate, has a teenage son, and shares her home with three dogs and four cats. No, she doesn’t live on a farm, she just loves animals. Her house is filled with dragons, though she does lament that they are the porcelain, non-flying variety.Kimber Leigh is addicted to romance, videogames, superheroes, villains, and chocolate—not necessarily in that order. (If she has to choose, she’ll take a chocolate covered superhero!)Her debut novel, Shadow Fire, is the first book in the Light Chronicles series. Watch for book two, Stolen Moon, a standalone sequel, coming August 2014.

This event was hosted by